A wild and gripping ride through the afterlife, virtual realities, real world horrors and everything in between 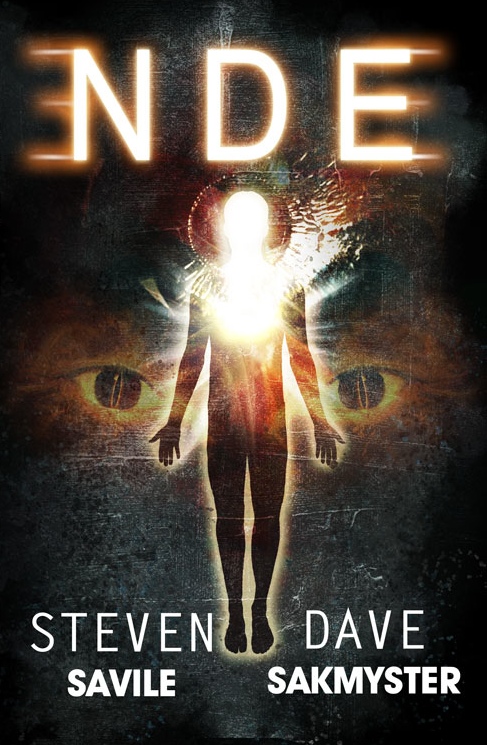 The Lazarus Initiative: After a Near Death Experience (an 'NDE') radically transforms the life of eccentric billionaire Nicholas Sheridan, he recruits a team of other survivors to study the experience. Recreating the conditions that opened the gate to the unknown, they will discover amazing connections, common visions and dramatic abilities among people who have come back from the dead. But what they haven't bargained for is that the gate opens both ways, and something else has escaped death. Something hunting them... Something hungry.

"With NDE, Sakmyster and Savile trek across a dark line into very strange country. Equal parts smart and chilling, this is a powerful and important novel." -Jonathan Maberry, New York Times bestselling author of EXTINCTION MACHINE and FIRE & ASH

"A wild and gripping ride through the afterlife, virtual realities, real world horrors and everything in between, NDE is reminded me of Neil Gaiman's American Gods wrung through The Matrix." -Stel Pavlou, author of DECIPHER and GENE


NDE was launched initially as a serial in 10,000 word installments with over 5,000 of the opening couple selling, but we decided to step away from that and finish the complete novel before issuing part 3 - and in the meantime Amazon offered us a 12 month English language exclusive deal in their White Glove program. Both Dave Sakmyster and myself have been very successful in the ebook market, between selling over 120,000 ebooks, and have sold into a dozen languages with our different novels. NDE is available for every language at the moment, and we'd love to see it out there.


Sheridan checked his phone and frowned. He pressed the TALK button. "Detective Wells?"

His eyes met Angela's and found them lost and desperate, glancing from his phone to Jenkins and that journal. Then back to the crypt. She shuddered again, and then ran to the ladder, as if she couldn't escape fast enough or put enough distance between her and the journal.

When she had left and Sheridan hung up, Jenkins glanced up from the journal's first page. "What was that all about?"

Sheridan slipped the phone in his jacket pocket. "Angela, or the phone call?"

Sheridan sighed. "Angela is . . . Angela. And I've come to trust her feelings.

"But you're a grown man, Jenkins. And a scholar, a searcher after truth, like I am. And I know no arguments are going stop you, because nothing would stop me if I held something like that in my hands."

Jenkins grinned. "Glad we agree. Then I'll get right on this."

"But be careful," Sheridan advised. "Very careful. Whoever hid it, wanted to make sure it wasn't found."

"So he thought it was important enough to save."

"Yeah, important enough that someone should know about it. Someone who came to investigate the crypt." Jenkins trembled with excitement, glancing around as if looking for a place to sit down to read. Then he seemed to remember his other thought.

"What about Detective Jonah Wells?  What did he say?"

Sheridan took a long pause, staring at the opened crypt. "Oh, just a business matter. And quite possibly the reason I was murdered."