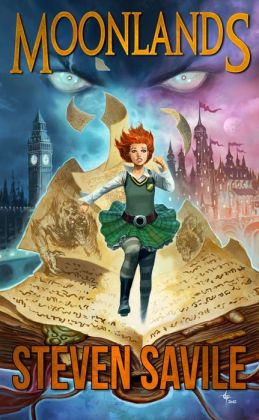 Fifteen-year-old Ashley has a complicated life. There’s no doubt her overachieving parents love her, but they are wrapped up in their own worlds for so much of the time it leaves her feeling like she’s alone.

Like a lot of teenagers, Ashley dreams of other worlds, but unlike a lot of teenagers her world is about to collapse as rifts to an ancient Fae Kingdom begin to open all around her. With the arrival of of a supernatural hit-squad intent on killing her, and an unexpected inheritance, Ashley’s London is about to become a magical and mysterious warzone where the prize is Ashley herself.

Ashley has to find out the secrets of her own life before she is killed. Balancing ancient prophecies, schoolwork and the love of her life is difficult to say the least! Take part of the wonderful world of Moonlands.

"Savile's writing is achingly beautiful and sweeps the reader away into a fantastic world they'll never want to leave. The story grips you by the throat and doesn’t let go, leaving you hungry for more. The author mixes political intrigue and epic fantasy in a coming-of-age story that will leave readers desperate to know how it’s all going to turn out for the young heroine and the assassin sent to hunt her down. This is a classic in the making." Debbie Viguie, NYT #1 Bestselling Author of The Wicked series

"Steven Savile's work symbolizes the spirit of Young Adult adventure reading! Bold and unexpected - Moonlands is a thrilling read for everyone who needs a break from the mundane. Savile proves he can write anything he wishes."
- Ashley Knight, author of Fins & Fathom


The wolf pack hit the streets of London howling. There were five of them, one Alpha leading them. They came through the gate at Golders Green, moving fast, following the scent of the girl. There wasn’t a star in the city sky, which was bright with the reflected glow of streetlights. They ran hard and low, keeping their bodies close to the ground. Their nostrils flared as they sniffed the girl out.

But the clock was against them.

The moon was a waning crescent in the bruised purple sky.

They needed to find her, kill her and return before the Moongate slammed shut. The mission was simple.

It was a mistake to believe that the Wolfen could only run with the full moon. That wasn’t true. The Wolfen could shift at will, but it was easier if the moon—any moon—was high in the sky. They had seven in their own sky, meaning where they prowled any night was Wolfen night.

No one was safe.

The gate the wolves had used was in the grounds of the old crematorium, close to the memorials of some of London’s most famous dead. It was like no gate you have ever seen. It was not made of iron or steel or wood. There were no hinges and no latch. It was, in fact, a gate by name alone, and should have been called more truthfully a weakness, because that was exactly what it was, a weakness between the worlds. It was an overlap: a place where the Kingdoms of the Moon and the Sunside brushed up against one another.

It was a rare occurrence, but when the moons aligned that weakness became a gate that could be crossed.

Tonight, for the first time in over one hundred years Wolfen prowled the streets of London.