The Walking Dead Meets The Road 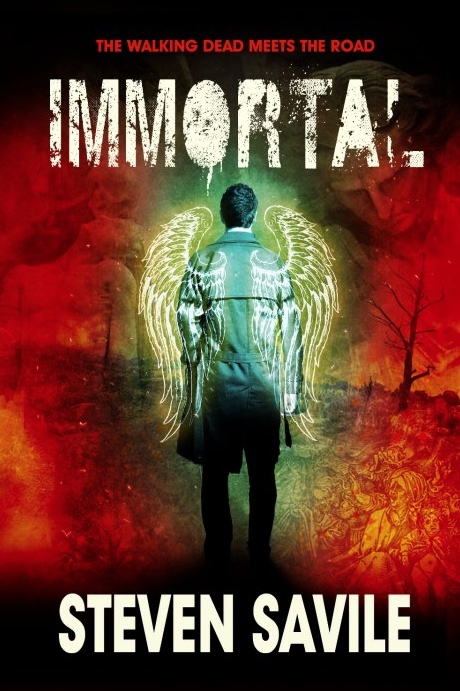 FROM THE BESTSELLING WRITER OF DOCTOR WHO, TORCHWOOD AND PRIMEVAL COMES A BRAND NEW POST-APOCALYPTIC THRILLER - THE WALKING DEAD MEETS THE ROAD "READ IT BEFORE THE END OF THE WORLD!" Kevin J Anderson, international bestselling author of The Dune Prequels, Hellhole and Saga of the Seven Suns A man awakens in a filthy bedroom with no recollection of who he is or how he got there. Seeing an old Gideon bible on a nightstand, he finds a name to call his own - Temple. IMMORTAL is the story of Temple's quest for identity and purpose in a dying, decaying world. He is no romantic knight, no Sir Gawain, he has no sword and no armour, and in this broken world no one he can trust. He turns his back on everyone and everything as he embarks upon the quest for his own Holy Grail, and tempted by demons and gods every step of the way, he must confront the terrible truth about who he is and how he came to wake up in that damned hotel room. He was fashioned in one explosive act of terror, a good man transformed into Death. Temple comes, not upon a pale horse like his eternal brother, but on foot, tired, broken, and sick to the soul. By turns heartbreaking, enlightening, and surreal, British fantasist Steven Savile has created a story that New York Times Best Selling Author T.M. Wright describes as "A story about Death written by a man who has clearly consorted with devils."

The night was a bitter black. There were no stars. The last star – the one they had stupidly called Hope – had faded away months ago. All that remained were layers of choking fog where not so long ago there had been thousands of points of light. It wasn’t pretty or romantic. It was just the new world.

Temple watched a sad-faced girl making a boat out of folded paper. Her hands trembled as she set it down in the gutter and let it sail away with all of her hopes and dreams stashed aboard. The paper boat bobbed and bounced up against the kerb, tumbling over the rapids of rain as they washed down the drain, and for a moment it looked like it might make it. The girl didn’t care. Even before it floundered she shrank back into her doorway. She pulled the collar of her threadbare coat up around her throat. The wind had that familiar cutting edge to it. Any day now, snow.

Someone pushed past him, head down.

Their grunt of apology or accusation was lost in the folds of their scarf.

He didn’t care. Reaching into his pocket for his tobacco tin and the makings of a cigarette, Temple sat down on the stoop of a crumbling tenement. A washer woman's mop sloshed around his feet, suds soaking down through the cracks in the pavement. He could smell cabbage boiling somewhere. It set the hunger pangs going again. Ignoring them, and her, Temple watched the girl.

Her fingers moved through some kind of sign, he realised. It wasn’t just a random twitch. Her fingers were signing a subliminal message to her soul. He had seen it before. Give up, it said in the language of the streets. Curl up in your doorway and die. Close your eyes on the end of this world and open them again on some fantastic place. He drew a deep breath into his lungs. Held it. Counted silently to eleven in his head then let it raft up slowly over his face like a veil of ghosts.