I Spy a Duke by Erica Monroe

In the first in an adventurous new series, USA Today Bestselling Author Erica Monroe introduces the Covert Heiresses: women who by day are the talk of the ton, and by night England's top spies. 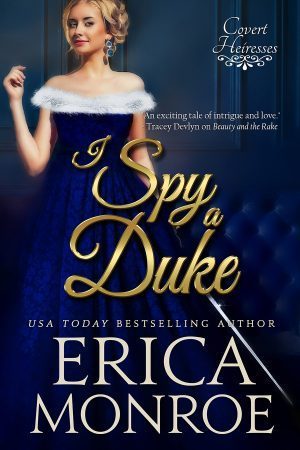 In the first in an adventurous new series, USA Today Bestselling Author Erica Monroe introduces the Covert Heiresses: women who by day are the talk of the ton, and by night England's top spies.

SHE WANTS REVENGE
When bluestocking Vivian Loren becomes the governess for the wealthy Spencer family, she's hunting for clues about the murder of her brother, not romance. But Vivian didn't count on one thing: James Spencer, the intrepid Duke of Abermont, who has a tortured past of his own.

HE NEEDS A WIFE
As head of Britain's elite intelligence agency, James can't afford the scrutiny the Marriage Mart would bring to his family once the Season starts. After discovering Vivian's quest for vengeance has made her a pawn in a treacherous plot of one of Napoleon's most deadly spies, James realizes they can help each other. She'll become his duchess, and he'll keep her safe.

What begins as a marriage of convenience quickly becomes anything but as the enemy spy closes in on them. When both husband and wife have dark secrets, love may be the most dangerous mission of all.
------
I Spy a Duke is a dark, sexy Regency romance with suspense elements. While it is book one of the Covert Heiresses series, it can be read as a standalone full-length historical romance.


ON THIS OF all days, James Spencer, code-named Falcon, had even less patience for social niceties than the small amount he usually possessed. Today, he’d give the great majority of his vast family fortune to be on a boat in the Atlantic Ocean, or perhaps in a little villa in the south of Switzerland. Bloody hell, at this point, he'd even accept the stifling heat of India, if it meant he was far away from the confines of Abermont House and everything familiar.

Yet he could go to the ends of the Earth and the memories of Louisa would not stop. Still, a year after her death, the recollections drowned him. Louisa, as she'd been as a child of four, her grubby hands digging through the dirt. A dozen governesses throughout the years could not curb her enthusiasm for nature. Louisa, a debutante during her first Season, wearing a pastel purple gown as she danced at her coming out ball. And lastly, Louisa's beaten and unconscious body, thrown over his shoulder as they escaped from the Talon's lair.

He curled his fist, desperate rage boiling within him as he pictured her mutilated body in the crude sickroom. Heard the pierce of her cries in his ears, then the shallow intake as she inhaled her last breath. He was useless to stop her death. Powerless. Still the fury seethed within him, a crazed, rancorous animal he could not cage.

Three hundred sixty five days had passed, and he remembered every detail as though it were yesterday.