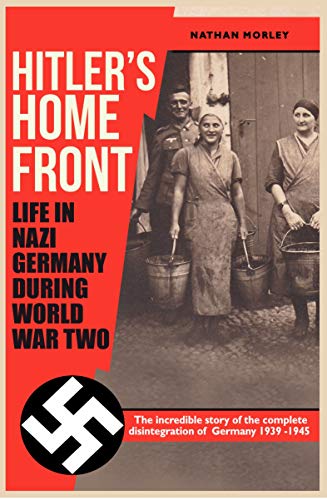 Hitler’s Home Front provides a compelling and comprehensive year-by-year account of ordinary life in wartime Germany, chronicling how the population tried to find normality during an unprecedented emergency.
Drawing on a multitude of sources, this book spans from the mundane to the momentous, such as how people coped with rationing, crime, travel restrictions, bombing, and how civilian morale fluctuated as the war rapidly turned against the Nazis.
The official newspapers of those years – including Das Reich, Völkischer Beobachter, and Der Angriff - show how the public learned about the successes and failures of their nation at war.
As well as drawing on the vast archives of German newspapers, police reports, and diaries of the public and politicians - period speeches, private unpublished letters, broadcasts, Deutsche Wochenschau newsreels and witness accounts help to build a picture of daily living in Nazi Germany.
From reaction to the dramatic events on the Eastern Front to the domestic difficulties of cooking with synthetic foods, life on the German home front is richly documented.


Even with the assent of Hitler to high office in 1933, the allure of breathtaking scenery, medieval towns and spas continued to attract international holidaymakers. Thomas Cook adopted the slogan: ‘Everywhere you will meet with the friendliest of welcomes’ in Germany’. However, a sudden rush of holiday cancellations followed the Night of the Long Knives and disturbing news reports detailing the maltreatment of Jews. After that, only youngsters seemed keener on visiting Germany, whilst older people were less enthusiastic. A brief stabilization of the tourist industry ended with the annexation of Austria in 1938. Cambridge student Frank Lee checked-into at a large hotel in Bavaria in July 1939, where only four visitors had booked rooms: ‘The orchestra played for them, but the waiters looked a very sad race, with nobody to serve and no tips’. Whilst Germany’s Axis partners lost little holiday traffic on account of political associations, the impact of the war on Austrian tourism was devastating.