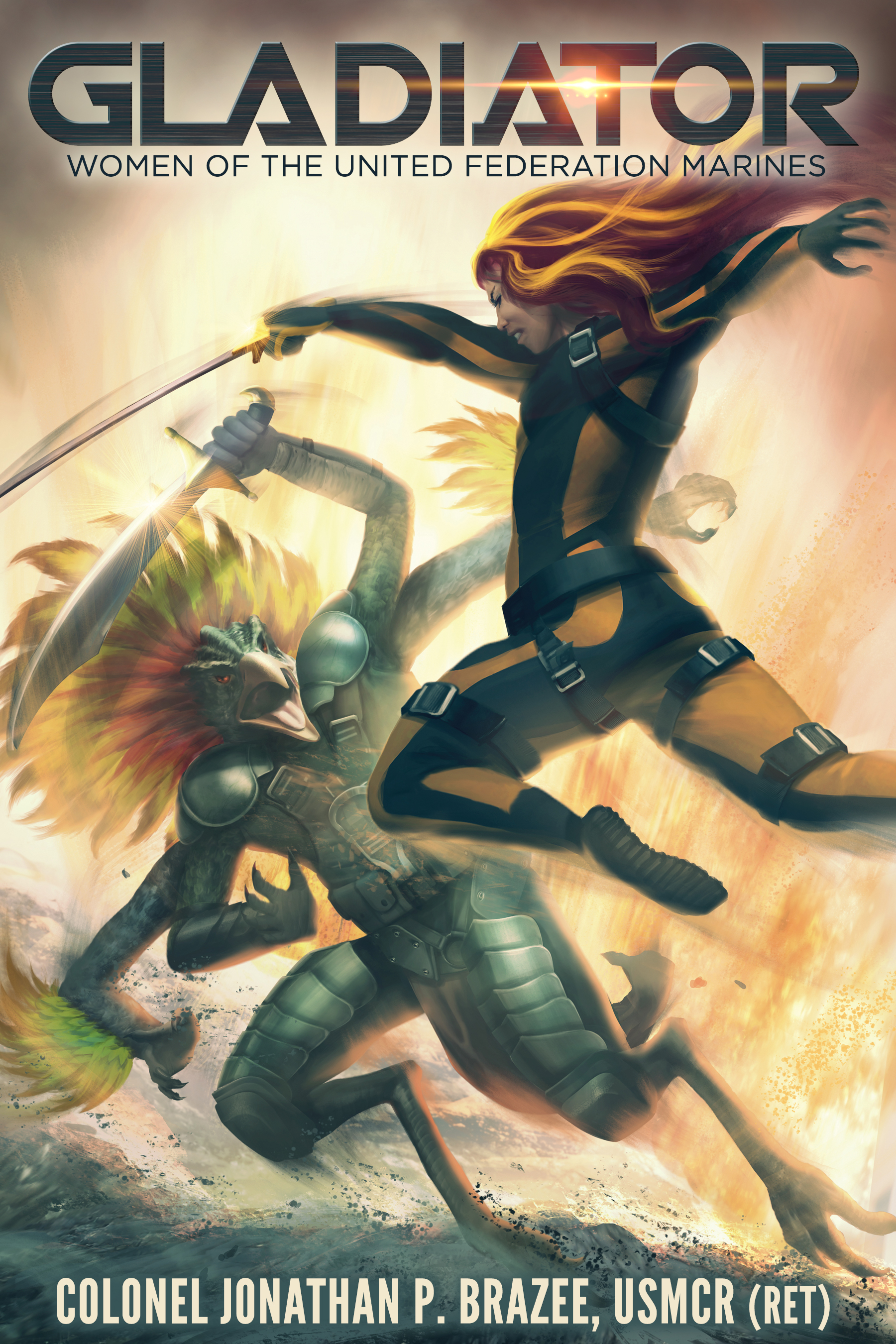 United Federation Marine Lance Corporal Tamara Veal catches the attention of recruiters who nominate her to serve as a Single Combat Specialist. Gladiators, as they are better known, are genetically modified human champions who meet Klethos d’relle in the combat ring when the Klethos issue a challenge for a human world. Win, and the planet stays in human possession; lose, and not only do they lose their lives, but the world as well. With the Klethos much more advanced and militarily powerful, able to defeat humanity in an all-out war, the challenge ring is the only way to retain at least some of the worlds of man.

While life as a gladiator is full of celebrity status and the gratitude of humanity, it comes with a heavy price. Not only is there the real risk of death in the ring, if a gladiator survives that, the “Brick,” or Boosted Regeneration Cancer, will claim her life within a few years.

Lance Corporal Veal, who has found a home in the Marines, has to decide whether to accept the nomination. She would have to leave her brothers and sisters in the Corps, be assigned to the combined human gladiator course, and undergo extreme genetic modification that will leave her almost unrecognizable from the woman she was before. Becoming a gladiator will enable her to serve humanity to a far greater extent than anything else she could do as a Marine grunt, but at a tremendous personal cost.


In the first month, the book sold 800 copies and had over 350,000 KENP pages read.  It reached 1,600 on Amazon's best-seller list, and has to date received  ten five-star and two four-star reviews.

It is the first of three planned books.


Blue blood spurted out, covering Tamara as the d’relle screamed and struggled, kicking her right leg free and falling to the ground.  She put both right arms on the ground to right herself, a true sign that she was hurt.

Tamara didn’t know how long it would take a d’relle to bleed out, and she wasn’t about to find out.  Her opponent was hurt, possibly fatally, but even so, she could still win the bout.  She didn’t have to live, only live longer than Tamara.

Tamara kicked out the lower right arm, and to keep from falling flat, the d’relle swung around her sword arm to catch herself.  Even so, she managed to swing it in an arc which almost caught Tamara.

Tamara ducked back, then with the Klethos queen on her hands and knees, lunged forward like a matador on a bull, driving her mameluke into the back of her opponent’s neck, right at the base of her feather crest.  A Klethos had a spine similar to a vacuum cleaner hose.  It was a very tough cartilage-type tissue, supported by bony strips that ran its length.  Tamara could feel the tip of her sword slide alongside one of the bony strips until it found an opening and pierced through the cartilage as she rammed it home.  The d’relle didn’t even shudder but simply collapsed to lie motionless in the blue-stained sand.

It only took a few moments for Tamara to realize that the d’relle was dead.  She’d been acting almost on instinct, and now her conscious mind was regaining control.  She jerked free her mameluke, raised it to the skies, and shouted out her pure joy.