The Amazing Story of Wayne Gamm 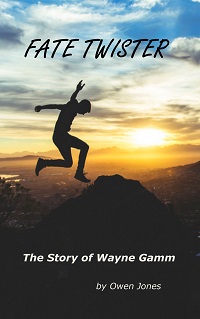 Wayne Gamm was born on a remote farm on a Welsh mountainside to sheep farmers on the 21st. of June. His mother and her mother, who were both witches, had been shown that he would be a big baby with unusual powers. They didn’t know exactly what that meant, but they thought it better for Gwynedd to have him at home, because they both felt that there might be trouble from Wayne if he perceived doctors, nurses or the midwife as a threat, which he might do, if his mother was screaming or someone slapped his bottom to start his breathing.

Wayne gave his first real demonstration that he could change fate when he caused his father, Sam, to fall after a noisy argument with his mother, but that was only the start of it. He causes both his teachers and fellow pupils at school to fear him, which leads to his ostracisation. However, Wayne will not believe that he is cause of these twists of fate, both good and bad, depending upon his , mood, because he has no conscious control over his ability.

If people make him happy, if good things are going on around him, they get better, but if someone upsets him or the atmosphere is bad, then it can only get worse.

He grows up lonely and in denial on his mountain as a shepherd boy, after the college headmaster effectively excludes him from school.

Eventuality, he makes friends with some racing pundits in the local pub and they start to bring him out of himself because it leads to more winnings. One day, he meets a man on the mountain who is a clown in a circus. He gives him two free tickets to any venue.

While there he ‘miraculously’ cures a seemingly lame horse, and several weeks later he is offered a job as a stable-boy in the circus by the horse’s owner and he is soon travelling with them.

While travelling in Spain, he learns to play the guitar and teams up with his boss’ daughter to sing songs to the waiting punters at the entrance of the circus. Later they go on holiday to New York and land professional bookings because of magical intervention.

Emma is interested in Wayne's powers and entreats him to teach her about them. However, this means admitting that he doesn't have the cofidence required to control them. Gradually, he gains that confidence as their love blossoms.

The owner of one of the pubs where they play offers to be their manager. The book closes with offers of work in the USA and the prospect of the wedding of Wayne and Emma the following year.

Wayne Gamm, the son and grandson of white witches, is a reluctant warlock, but he learns that Fate cannot be changed, only twisted.


Fate Twister has received good reviews but has not been entered for any competitions.

The screams coming from the secluded, old stone farmhouse sounded inhuman, which was just as well, because the only red-blooded creatures that could hear them were four-legged, although they fully realised what was going on inside. Mrs. Gwynedd Gamm was having her first baby and her mother was helping her deliver it. The ewes in the field understood the pain Gwynedd was going through, even if her husband, Samuel Gamm and his drinking companions in the pub in the local village of Dremaelgwn did not.

“Mam! Get this baby out of me right now! Arghhh!”

“Try to relax, dear, and push… keep up the pressure…”

“Maybe I should have gone to the hospital to have him… we knew he was going to be a big, arghhh, baby!”

“Now, Gwynnie, we discussed that, didn’t we, love? It was just not possible… far too dangerous. Just keep up the pressure, you’re doing a great job, for a first-timer.”

“Yes, you can, Gwynnie, you have to, and you know that I can’t help you like that as well… no-one can… That’s why you have to have the baby here at home with no outsiders present.

“It was written, Gwynnie, you know that as well as I do. Hush now, Gwyn and concentrate, all women go through this and I promise you, that, one day, maybe in years to come, you will look back on this day with great pleasure.”

“I’m, uh, arghhh, never going to have another one and that’s for sure!”