Would you like to know the therapy secrets of a psychiatrist who assesses criminals? Are you sure? 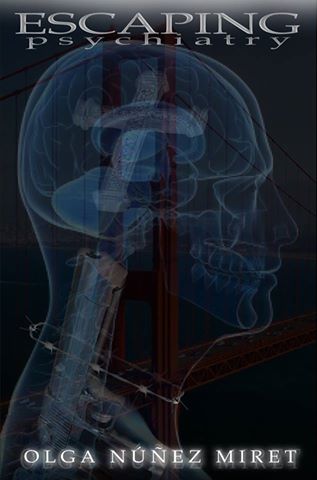 ‘Escaping Psychiatry’ has it all: intriguing characters, noir style, thrilling pursuits, dangerous situations, crime, serial killers, religion, family secrets, murder, psychological insights, mental illness, trauma, debates about prejudice and morality, heated trials, police investigations, corruption, and mystery. If you enjoy ‘Wire in the Blood’, ‘Cracker’ and ‘Lie to Me’ and you are not scared of going deeper and darker, dare to read on.
'Escaping Psychiatry' is a collection of three stories with the same protagonist, Mary, a psychiatrist and writer. She is trying to develop her literary career but circumstances and friends conspire to keep dragging her back to psychiatry.
In ‘Cannon Fodder’, Phil, a lawyer and Mary's friend asks her to provide a report on one of his clients, a young African-American man called Cain White. Cain is a very religious man and has been accused of inciting a riot at a religious meeting. He says he can hear God’s voice. He insists that God is black and his appears to be a Black Nationalist message. Is Cain insane, deluded, misguided, looking for media-attention, or a Saint? To find an answer to these questions Mary talks to his family and friends. Although she concludes he is sane,Mary’s investigation uncovers some very damaging revelations about his family life, beliefs and local attitudes. Who is a saint and who is a sinner is a matter for debate. The more Mary gets involved in the lives of Cain and those close to him the more she realises how dangerous secrets are. Like time-bombs ready to set off any minute.
‘Teamwork’: Captain Tom McLeod, from the San Francisco Police Department, invites Mary for a meal at home with his wife. When she meets their other guest, a young detective called Justin, she quickly realises there is an agenda well beyond a friendly meal. Justin’s partner, mentor and father figure, Sgt David Leaman, was killed a couple of months earlier during a routine investigation. Justin witnessed the event but he insists in going back to work and refusing any therapy or counselling. Tom and others at the department are concerned about his mental state but have failed to convince him to accept professional help. Both Mary and Justin are reluctant to engage in the ambush/informal consultation organised, but eventually decide to give it a try. At first sight it appears to be a straight forward case of unresolved grief, but things aren’t as clear-cut as they appear and Mary ends up getting too personally involved with the case, to the detriment of her professional objectivity.
In ‘Memory’, Mary runs out of her apartment after a difficult encounter with her friend Phil, and goes missing. When she is found it seems that she was hit in the head, abducted, raped and she is suffering from amnesia. She never recovers memory for the assault and finds it difficult to come to terms with something she cannot recall.  The clues point towards a serial killer who could not finish his job in her case. But some things do not fit in. Who disturbed the killer? Why was she left there? The crime and the investigation surrounding it have a profound impact on Mary who decides that she needs to reconsider her life and start anew.
The epilogue revisits Mary at the point of the trial of her abductor and sees what changes have taken place in her life. Will she finally manage to Escape Psychiatry?
Although these stories are fictional, the author, a forensic psychiatrist, brings her expertise and insight to the material, lifting it above a standard crime caper.


Escaping Psychiatry is ranked 3500 in Amazon.com for serial killers thrillers and around 7000 for other thrillers. The Spanish version ranks around 2000 (in religious fiction... not exactly what it is, although the first story has a religious theme). The book is also available in audio version (in English) and has been chosen by Fiberead to be translated to Chinese (that's just started recently).

I have just completed the draft of a prequel that I'm planning on offering free as an enticement for readers to get into the series (I'll be working on the Spanish translation myself) and I have other books planned in the series.

People are usually curious because I'm a psychiatrist and so is the main character in the story.

I have a blog where I'll be sharing the prequel too from January, I have over 25000 followers in Twitter, I belong to several author groups where we cross promote out work and I'm planning on using paid promotions and doing more giveaways to further the interest in the book.

If any translators would prefer to translate from Spanish, I could offer that version too.

I share the draft of the first story in the book, in Spanish version, in Wattpad and that has over 2000 reads and 88 votes.


Mary had left her first career in Psychiatry for Literature. She was still interested in people, but couldn’t avoid getting sidetracked by the individuals, whom she usually found more interesting than their mental illnesses. She had been ‘away from civilisation’ for a couple of months working on a story, and Phil’s letter was all news to her.

She’d met Phil at University. They’d attended seminars and lectures on the race question and she knew that Phil had taken that line of work on his daily practice.

Phil’s request was surprising. He wanted a report on the mental state of a young man he was defending. He was supposed to have incited a group of African-Americans to riot in a religious meeting in a small town in Georgia. The young man, Cain White, had said to anybody interested in listening to him, that God spoke to him. God’s message seemed to be Black Nationalist in content: “love yourselves”, “black is beautiful”, “you are morally superior”…The pro- and against-Cain factions ended up fighting and the police intervened. They let Cain off on bail, but the situation had got out of hand. Newspapers got involved, people began calling Cain ‘saint’, they talked about his ‘miracles’, the authorities said he was mad…Phil was his solicitor and wanted a report. When Mary had protested saying that there were more highly qualified experts than her and that she wasn’t even working as a Psychiatrist now, Phil said that Cain had refused to see anybody else. He didn’t mind her because she was a writer, but he didn’t want a shrink.