Four friends get transported into their fantasy game world. 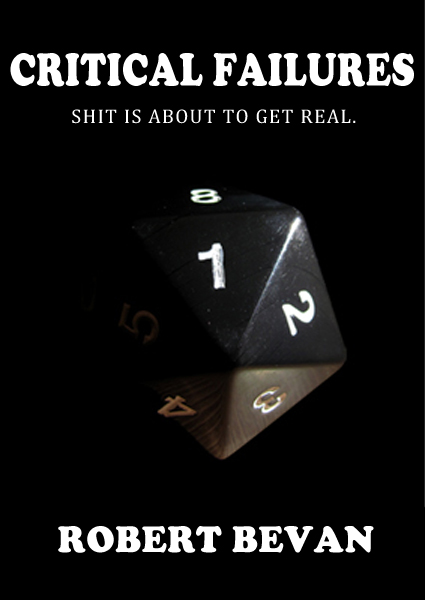 One minute, they're drinking away the dreariness of their lives, escaping into a fantasy game and laughing their asses off. The next minute, they're in a horse-drawn cart surrounded by soldiers pointing crossbows at them.

Tim now has the voice and physique of a prepubescent girl. Dave finds that while he lost a foot or two in height, he somehow acquired a suit of armor and a badass beard. Julian's ears have grown ridiculously long and pointy. And Cooper... well Cooper has gotten himself a set of tusks, a pair of clawed hands, and a bad case of the shits. He also finds that he's carrying a bag with a human head in it - a head that he had chopped off when they were still just playing a game.

Shit just got real, and if they want to survive, these four friends are going to have to tap into some baser instincts they didn't even know existed in their fast-food and pizza delivery world.

It's fight, flight, or try to convince the people who are trying to kill them that they don't really exist.

Meanwhile, a sadistic game master sits back in the real world eating their fried chicken.


Critical Failures has been consistently rising in both sales and rankings. During a recent promotion, it was ranked #1 on Amazon's 'Comedy' and 'Sword and Sorcery' lists.


Tim stared out through the grimy front window of the Chicken Hut. The red neon sign cast a pink glow on the parking lot, and Tim kept one hand in the pocket of his jeans to restrain against its natural impulse to flip off the switch. His watch said nine o’clock, Time to close. They hadn’t had a customer in over forty-five minutes, and he didn’t want one coming in now. He’d already had three beers and was well into a fourth. Thoughts of chicken and customers would have been well drowned out had it not been for the continued flickering and buzzing of that damned sign. It was a beacon in the darkness, inviting just one more fat asshole to come in for some chicken after all of the equipment had been shut down. But he couldn’t turn it off. The new Cavern Master would need the sign to find this place.

He hadn’t noticed the dull banging until it stopped suddenly. His gaze turned from the parking lot to the interior of the restaurant. Everything was as it should be. Cooper was drinking a beer. Julian, Cooper’s coworker who he’d brought along for the game tonight, was engrossed in the Caverns and Creatures Third Edition Player’s Handbook. The banging started up again.