Captivated by an Adventurous Lady by Sandra Sookoo

The quest to break a mummy’s curse turns dangerous when a peer ends up dead. 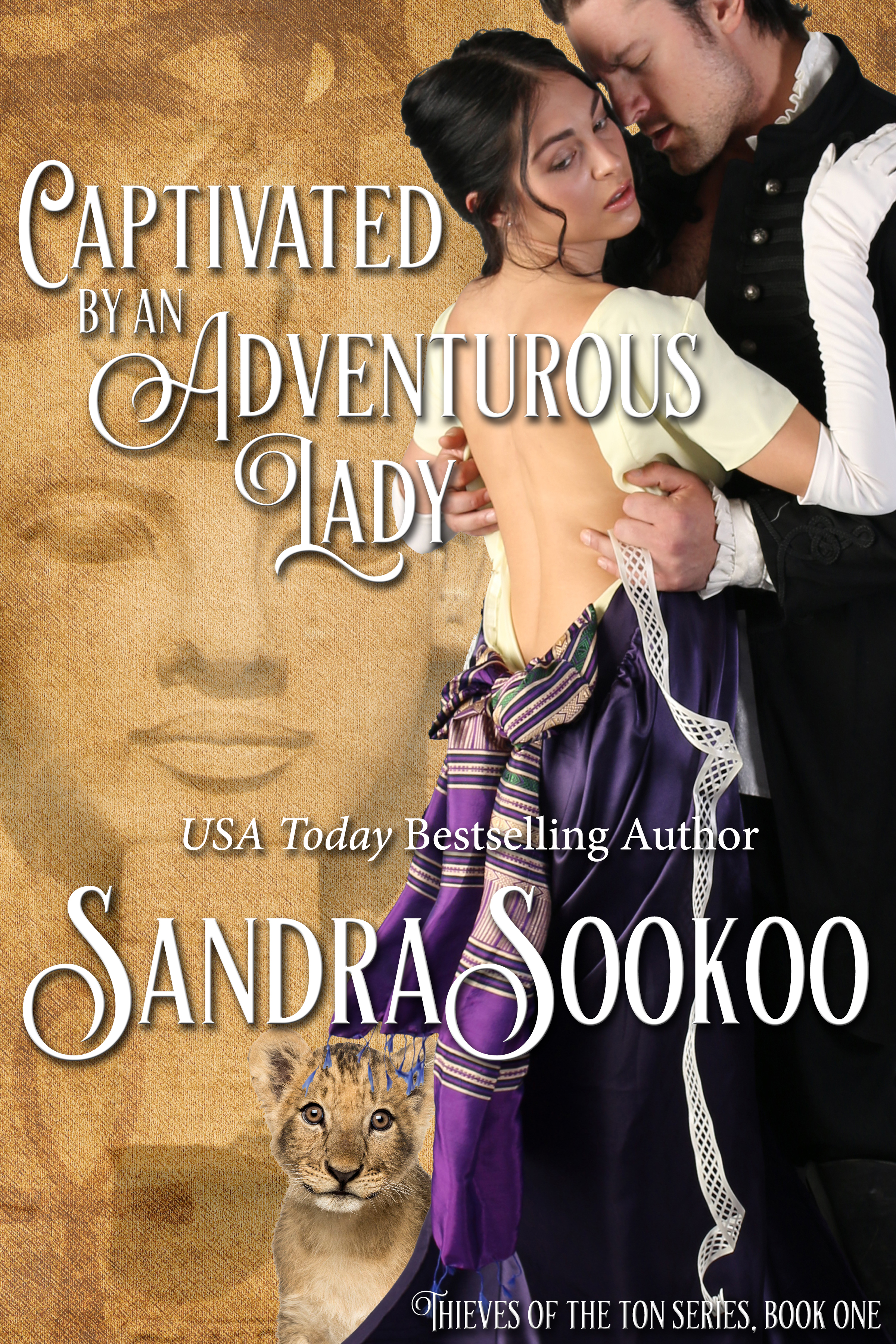 Miles Lawrence Hawkins, fifth Earl of Archewyne, is alone and the last of his line, save for a young daughter, and he’s made peace with that…Yet unexpectedly finding an attractive female thief in his library gives him doubts.  Drawn into the lady’s insane plot to retrieve various stolen mummies from around London—including the British Museum—he accompanies her merely to see what will happen next. Being captivated by her quest and intrigued by her talent for skirting the law is a much needed distraction from the stress of his own life’s misfortunes.

Lady Emmaline Darling, skilled thief and only child to the Earl of St. Ives, is under a mummy’s curse. Believing herself damned due to her father’s penchant for removing antiquities from Egypt, she’s vowed to return a pair of mummies to their eternal resting place in order to save his life and her own. Being caught by Miles wasn’t in her plan, and neither was falling for his charm, but she’ll do anything to see he’s free of the curse as well, for their histories are too intricately connected for his ills to just be bad luck.

When a peer with ties to them both ends up dead and Emmaline’s jewelry is found at the scene, Miles is honor bound to offer for her and lend her his protection. Despite her refusal, desire pulls at them and scandal surrounds them, and when Miles is summoned to once more embark upon a secret mission for the Crown, he must shed everything that will become a liability, but keeping Emmaline out of trouble—and out of his mind—is easier said than done.


Book sales over the 2 years since release have been strong. It continues to be a proven sales force, and since it's the first in the series, it's a popular read. Has hit the Amazon bestseller's lists in a couple of categories a few times.


His sigh had enough force that it might have come from his toes as he stared at her. He offered the jacket, holding it out and open to her. "Put this on." The order was no less commanding than it had been a half hour ago.

"Why?" She couldn't shake the feeling that every male she'd ever known had left her vulnerable to life's wolves more times than they hadn't.

"I'm coming with you." He shook the jacket, obviously expecting her to comply.

"Absolutely not," she said, repeating his exclamation. Emmaline popped her hands onto her hips. "This doesn't concern you."

"Like hell it doesn't. I didn't escort you back then. I won't make that same mistake now. My honor is a good deal more developed." When she didn't put the jacket on, he came closer. "If you don't wear the jacket, my lady, I will be forced to take drastic measures. "His low voice rumbled in her ear and sent delicious tickles throughout her body.

"How does a missing mummy and my father's declining health have anything to do with you?" She ignored the fact her question sounded breathless while she also ignored the fact that she slid her arms back into his jacket.

"If you want to discover how our lives might be connected, you'll have to let me accompany you to the museum." A healthy dose of smug victory laced the reply. "At least I can offer you the ride."

She smiled. "Fine. It will save me the cab fare and I'll have someone to converse with." She set out down the path. "Most of the men I talk to or talk about are older by a few thousand years and have the decided disadvantage of being dead."

Perhaps there was something to be said about being among the living after all.