An Exciting Future by Owen Jones

The Story of Lek, A Bar Girl in Pattaya: vol 2

The continuing story of Lek, a bar girl in Pattaya, Thailand 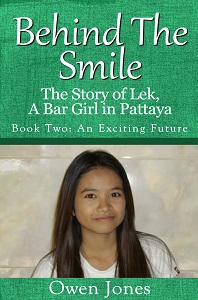 Behind The Smile - The Story of Lek, a Bar Girl in Pattaya, Thailand

This second book continues Lek's story from where book one left off and covers the next few years of her life.

It gives more information about life in a rural Thai village and what is like to live there for a woman like Lek, whose mind has been expanded by working in a popular tourist city for ten years and meeting foreigners from all over the world.

The question that this book poses is whether Lek would be able to shoehorn herself back into the rigid village society that she once loved so much and will the others accept her after what she has been doing.


Book sales are very good. This volume and the rest of the series are considered the classic story of Pattaya bar girls - the biggest attraction in Asia's biggest nightspot.

As the wheels of the aircraft touched down on the runway at the new Bangkok International Airport called Suvarnabhumi, Craig knew that he was going to have his hands full with Lek. She suffered badly from travel sickness – it was her one big weakness, but she even got sick on the bus going to the market, so a flight of 11,500 kilometres and fifteen hours was always going to be a problem.

Lek had taken five of the green tablets which were her favourite anti-travel sickness pills. She always seemed to have about twenty of them in her bag. One tablet would make her appear a little drunk, but five made her seem like an escapee from a lunatic asylum. He had seen it on the outward flight. He looked at her sitting next to him; her eyes were glassy and she was humming something quietly to herself.

“Are we there yet?,” she asked, “That was quick. Have we stopped off somewhere?”

“We’re in Thailand,” he replied a little too testily.

Craig was fifty years old and had never asked a woman to marry him so far, but he thought he might like to ask this one. She was a handful, as they say, that was to be sure, but there was also something about her that he found very special.

He didn’t like her taking those pills though, but he knew how badly affected by travel-sickness she could get. She’d had to throw up in her new crocodile skin handbag once – her pride and expensive joy – because they had gone on a short bus ride and she had forgotten to transfer all her paraphernalia into the new bag. It was either be sick in her new bag or on the floor of the bus and she would rather die than do that and lose face.

Collection/Series:
Behind The Smile: The Story of Lek, a Bar Girl In Pattaya