Unrelenting - Love and Resistance in Pre-War Germany by Marion Kummerow

Berlin, Germany 1932. In a time of political unrest and strife, one man finds the courage to fight back... 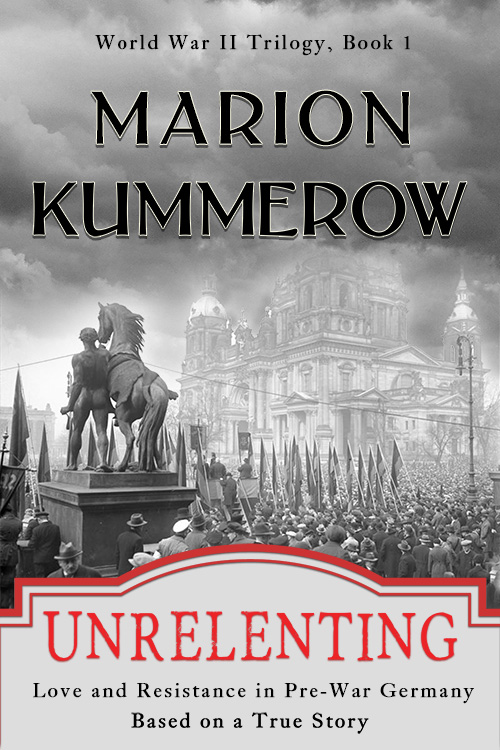 Dr. Wilhem "Q" Quedlin, chemical engineer and inventor, lives for his science. A woman is not in his plans—nor is it to be accused of industrial espionage.

But things get worse from there.

Watching Hitler's rise to power spurns his desire to avoid yet another war that will completely destroy his beloved country. Q makes the conscious decision to fight against what he knows is wrong, even if working against the Nazis could mean certain death for him— and anyone he loves.

Hilde Dremmer has vowed to never love again. But after encountering Q, she wants to give love a second chance.

When Q discloses his resistance plan, it’s up to Hilde to choose between her protected life without him or the constant threat of torture if she supports him in his fight against injustice.

She has witnessed enough of the Nazi government's violent acts to be appalled by the new political power, but will this be enough for an ordinary girl to do the extraordinary and stand beside the man she loves in a time of total desolation?

This World War II spy story is based on the true events of one couple's struggle for happiness while battling a war against their own leaders.


About 150-200 sales per month, around 50-60 ranking in Historical Ficton Germany in the Amazon US store.


Dr. Wilhelm Quedlin didn’t know it, but today, the course of his life was about to change.

Q, as his family and friends called him, was on his way to work on this sunny October morning in 1932. Oranienburg was lovely this time of year, with trees flaming their fall colors along the banks of the Havel river.

Strolling through the gates of Auer-Gesellschaft, he quickly headed to his labs. Then stopped. The door to his office stood open, which was peculiar, but he entered nonetheless. He stopped just inside, surprise freezing him in his tracks. Two police officers were waiting for him. He recovered quickly and removed his hat, nodding to the men congenially as he placed it on the rack.

“Good day, gentlemen. What can I do for you?” he asked, trying to mask his surprise and worry with a polite welcome. An unexpected visit from the police was almost never a good thing. The political climate in Germany had grown increasingly tense, and everyone knew it was much better to keep a low profile these days.

“Doctor Quedlin, we need you to accompany us down to the police station,” the older officer said, unashamedly eying Q with blank, dark eyes.

“Is there a problem?” Q asked, trying to remain calm even as his mind raced to identify anything he could have done wrong. And who might have been around to witness his error and report it. Telling on one’s fellow man was no longer taboo like before, but actually encouraged by the government.

“You need to come with us now,” the older officer repeated, stepping forward, his expression brooking no argument.