Megan The Misconception by Owen Jones 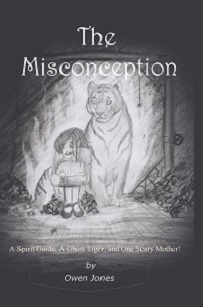 "The Misconception' is the first story in a series of twenty-three novelettes about the spiritual development of a young girl called Megan. She has latent supernatural powers that make her curious about them, but no-one else she knows seems to have any idea what she is talking about.

Or do they? Because both her grandmother and her mother do everything that they possibly can to stop Megan from finding out any more. The story shows Megan's frustration with the living, so when help comes from Beyond, she grasps it with open arms and slowly develops her supernatural powers.

It is about Megan's Awakening.

'The Misconception' is about the paranormal powers which lie within all of us, which would make them not so much paranormal as quite normal, if people were not so frightened of the supernatural, which is quite natural too.

This is a book for everyone who has ever wondered about the supernatural, paranormal or metaphysical - it is about the normal, spiritual development that all higher life have to go through in order to reach their ultimate, unavoidable destiny, however long that may take. These stories are based on fact in more ways than one.


The Megan Series has not been marketed well, but sales are picking up.

Megan was locked in the coal cellar again on the verge of tears. She was only twelve and she couldn't understand why her mother would do such an awful thing to her. It had happened half-a-dozen times before, but like as not, she thought, her father didn't know anything about it. She had never told him and she was sure that her mother would never have said anything either.

There was an unspoken pact between her and her mother not to let each other down, but here she was again, sitting in the cellar, in the dirt and dust with who-knew-what horrible creatures eying her up.

She didn't know. It was pitch black and it took all her strength to keep herself from crying and begging her mother to let her out. But she had tried that on other occasions and her mother had put unreasonable demands on her as conditions for her release. Conditions that she knew she could not fulfill, try as hard as she might.

Sometimes, it seemed that she was the only one who took the pact seriously.

Despite herself, tears began to roll down her cheeks again, making invisible river beds through the dust on her face, washing coal dust onto her school uniform. It was too much, it really was. How could someone who understood her so well, behave so cruelly towards her only daughter?

Megan jumped involuntarily as her mother willfully hit the door with the vacuum cleaner as she passed by. There was not even the slightest sliver of light from which to draw comfort, so she did what she had found helped her the most and scrambled up the coal heap to the wall and then to her right until she found the corner.

There, she wrapped her long skirt around her legs to stop anything creeping up under her clothes and tucked it underneath her.